A Brief Introduction to Orchestral Conducting
by Juan Saenz
© 2020 JustViolin.org 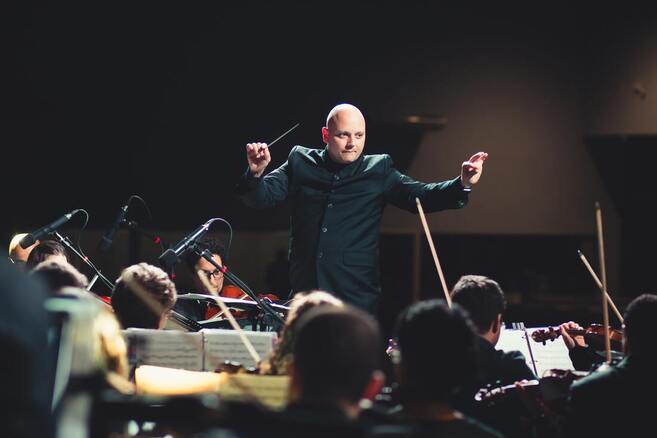 Conducting is one of the most mysterious and captivating professions out there. Among musicians, conductors are revered individuals who usually due to carrying great musical achievements on their backs, gain the privilege to guide and lead other musicians into performance. For the general public, this figure is still enigmatic in many ways despite the fact that the twentieth century saw the rise of several conductors who have entered the public eye, Leonard Bernstein or Herbert Von Karajan, to name a few. In the following essay we will shed some light on its practitioners while at the same time attempting to explain some of the ins and outs of this noble yet shrouded profession.

​What It Takes to Become a Conductor

It is probably unnecessary to state that conductors need to amass several conditions to exercise their profession. Among these, some are “given”, and some are learnt. Among the qualities which are usually given by nature and not necessarily learnt we have: ​
On the other hand, several conditions can, and as a matter of fact, should be learnt. These are:​

​What Does a Conductor Actually Do

The main and most important task of a conductor is to lead rehearsals. It is in this moment where most of the work truly occurs. It is during rehearsals that the ensemble comes together to play, guided by the will of the conductor who uses their skills to organize, hone and perfect the performance according to their own individual ideas regarding the music at hand. Some great figures of the past have become famous for being ill-tempered and severe with the players under their baton. Ideally, a conductor should not be an authoritarian figure but an individual who is able to achieve the unification of a general consensus among players through communication, not dictatorially imposing their own truth.

Without a doubt, the conductor’s key moments of action are when the music needs to begin, when the tempo must change and when it finally needs to stop. In a few words, a conductor usually operates like a plane pilot, engaging in absolute control throughout its task, yet particularly concentrated during take-off and landing.

To control the rhythmic activity of a piece of music, a conductor will use the baton in the right hand to beat time. This process is meant to help players organize the metrical structure of music and to keep the ensemble together. Furthermore, this beating of time contains other pieces of important information like general dynamics, articulations and all the small inflections that make a performance original. Meanwhile, the left hand is used for important tasks like giving cues, aiding in phrasing and any kind of particular communication which might be needed on an individual level.
​
It is a curious fact to remember that the figure of the conductor, specially the popular image of the conductor as an Olympian figure of the utmost musical authority which waves its arms passionately to the great masterpieces of the past, wasn’t actually established as such until well into the nineteenth century when it was born out the sheer necessity to keep an ensemble together as the complexity of the music and the number of players involved grew larger and larger. Previous to this, the first orchestral ensembles which began to appear during the seventeenth century had no conductor. It was usually the case for the composer to conduct from the harpsichord. Later, the concertmaster or principal violin player usually led the group through the use of small gestures which served the purpose of getting the entire ensemble to breathe together so as to begin and end the music in a synchronized manner.
​

​What Kinds of Music Require Conductors

The figure of the conductor is most necessary in certain musical genres which require a high level of coordination between multiple individuals. To name a few, stage works are almost impossible to produce in absence of a conductor, these include ballet, musical theatre and opera. Furthermore, works of music which feature great rhythmic complexities like most twentieth century music need a conductor to assure the synchronization of every single member of the orchestra.

This profession also features several different possibilities for specialization among the different trends of so-called “art-music”. Some conductors focus on exploring twentieth century and contemporary composers works. Others choose to work on reviving the works of ancient masters, focusing almost exclusively on pieces and composers of the medieval, renaissance and baroque periods. Last but not least, most conductors focus their life’s efforts on studying and performing the works of the so-called common practice period of classical music. This period essentially features what most people think about when imagining classical music, namely, composers from Bach and Mozart, to Mahler and Strauss.
​
Finally, the conductor is expected to fill a much deeper role within an ensemble which is that of not only being the emotional leader of the group, but also the figure on which the responsibility of producing accurate and inspired interpretations of the works at hand.
​