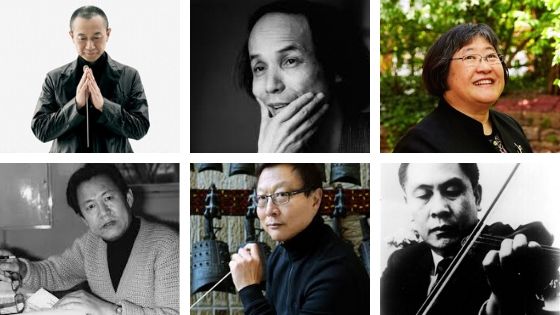 Written by two composers when they were still studying at the Shanghai Conservatory of Music, this concerto can be heard at concert halls worldwide. It is a musical adaptation of the tragic love story of the Butterfly Lovers, which has the equal significance of the Romeo and Juliet in the western countries. The piece holds a special place in the violin repertory as it was the first classical violin concerto written by Chinese.
​
This concerto is written in a single movement with various sections portraying different scenes of the story. With the use of Chinese folk tune, pentatonic scales, along with ornaments and glissandos on the violin, the composers managed to carve out a distinct Chinese characteristic in the music despite being scored for a western symphony orchestra.
​

​Takemitsu was a well-known Japanese composer and an influential figure of the 20th century. He composed for a wide range of genre, ranging from instrumental and vocal works, to film and electronic music. His music was largely experimental and avant-garde in terms of tonality and timbre. He was influenced by modern composers such as Arnold Schoenberg, Olivier Messiaen, Claude Debussy, John Cage, and Edgar Varèse.

Distance de fée for violin and piano was composed in 1951. It was inspired by a poem of the same name by Shuzo Takiguchi and it represents one of Takemitsu’s earlier compositions. The influence of Debussy and Messiaen were clearly felt here with the unconventional use of tonal harmony, while the melodic writing of the violin showed traces of Japanese music.

Tan Dun is mostly known for his film music in the Oscar-winning movie Crouching Tiger, Hidden Dragon. A highly prolific composer, his music was once banned in china for its western inclination. Tan Dun has been involved in many innovative programs, notably the Youtube’s Internet Symphony which has reached 23 million people. He is also a UNESCO global ambassador and a global cultural leader in various issues.

This violin concerto was written in 2009, commissioned by the Juilliard School and the Singapore Symphony Orchestra for violinist Cho-Liang Lin in honor of his 50th birthday. Tan Dun remarks:
​   “This is a piece about memory and about the possibilities of human love for one another, culture, and the world. It is a statement about personal understanding at different stages of life. Many times, things that happen to us as teenagers are only understood once we mature. Only when we have followed the steps of Confucius can we understand the feelings we had as teenagers. Love is sex. Love is dream. Love is memory. Love is philosophy. Love is blue and red…”
​

Isang Yun was born in Korea and later become a German citizen, after a life marred with war, imprisonment, and kidnapping. His compositions often sought to develop Korean music using contemporary western techniques. He composed three violin concertos (No.1 in 1981, No. 2 in 1986, No.3 in 1992) along with a handful of solo and chamber works for the violin.

​   "I was born in Korea and project that culture, but I developed musically in Europe. I don't need to organize or separate elements of the cultures. I am a unity, a simple person. It's a synthesis." — Isang Yun

Sheng is a respected Chinese-American composer who has been commissioned to write for among others, the White House and the 2008 Beijing Olympics. He has also collaborated with Yo-yo Ma in the Silk Road Project. He now teaches composition at the University of Michigan.
​
The Stream Flows for solo violin was completed in 1990 and dedicated to Hugo Weisgall. In Sheng’s own words, he described the piece as:
“The first part of the “The Stream Flows” is based on a well-known Chinese folk song from the southern part of China. The freshness and the richness of the tune deeply touched me when I first heard it. Since them I have used it as basic materials in several of my works. Here I hope that the resemblance of the timbre and the tone quality of a female folk singer is evoked by the solo violin. The second part is a fast country dance based on a three-note motive.”
​​

Ma SiCong was a prominent Chinese composer born in 1912. He left for France at the age of 11 to learn the violin. After a brief career back in China, he went back to France again to study composition in 1931. When he completed his study in 1932, he came back to China and held various positions in different cities across China, Hong Kong, and Taiwan. In 1966, he became a victim of the cultural revolution, which led him to flee to Philadelphia, and remained there until his death.

Ma wrote a lot of patriotic music as well as music that reflects the culture of his homeland. He composed the Inner Mongolia Suite in 1937. The three movements in the suite include Epic, Nostalgia, and Dances Beyond the Frontier. Among the three, Nostalgia remains as one of the most popular Chinese violin pieces of the 20th century, frequently played in concert halls around the world.
​

Chen Yi was the first Chinese woman to receive a master's degree from Beijing's Central Conservatory in China. She is currently based in the United States and held the position of professor of composition at the University of Missouri – Kansas, along with her husband Zhou Long, an equally prominent Chinese composer. She is the recipient of many prestigious fellowships, awards, and honorary doctorates.

Among her many instrumental works, Memory for solo violin was written as a tribute to the late Professor Lin Yaoji, a former teacher of Chen. In the program notes, the composer wrote the following:
"Dear Professor Lin: I wish you could hear the tune in my Memory, which sounds like my painful cry out of your name in our Cantonese dialect. I expressed my deep sorrow in the music, to remember your fatherly mentorship. Your meaningful smile will always be with us encouragingly."​

This piece is also arranged for solo cello by the composer, and adapted for solo flute by Mary Holzhausen.
​