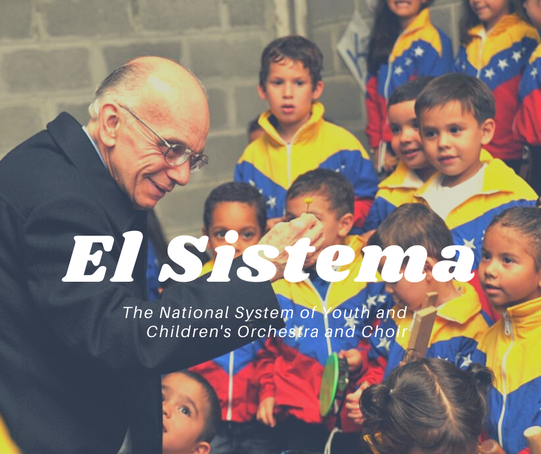 Maestro Abreu with Children
​The National System of Youth and Children's Orchestra and Choir of Venezuela, also known as "El Sistema," is a social and cultural work of the Venezuelan government. Started in 1975 by Venezuelan music teacher José Antonio Abreu, "El Sistema" proposed to structure the group and individual instruction and practice of music through symphony orchestras and choirs, as a way towards better social organization and humanistic development. This pedagogical and artistic model, which has gained recognition throughout the world, is a social program with the most significant impact in Venezuela's history.

The Simón Bolívar Musical Foundation is an institution open to all Venezuelan. It has a flexible, innovative, and dynamic management structure perfectly designed and adapted to the philosophy and objectives of "El Sistema." The Foundation is the legal and administrative platform aimed at facilitating and materializing all programs, exchanges, and agreements between all public administration bodies, both local and foreign government entities, and private companies.

Likewise, it is the entity where economic resources from the Venezuelan State and international organizations are obtained. The Foundation has assumed a managerial-administrative role throughout the nation, and it governs the entire network of orchestras and choirs, educational centers, and centers for the teaching and administrative team, while respecting the autonomy of each region.
​
​The National Center for Social Action for Music is the headquarter of "El Sistema" and it is located in Caracas, on Amador Bendayán Boulevard, Quebrada Honda, next to Los Caobos Park and close to the majestic Teresa Carreno Theater.​

The National System has become a symbol of beauty and union to the world 45 years after its creation. It currently has over one million children and adolescents enrolled in over 400 nuclei (community music centers) throughout the nation. In addition to 1,772 orchestras, 1,426 choirs, and 694 groups of Alma Llanera (folk music program), the System has inspired more than 70 countries in Europe, America, Asia, Africa, and Oceania. This Venezuelan model has demonstrated that it is a real and sustainable way of education, progress, and peace.

In Venezuela, "El Sistema" has developed social initiatives that improve the quality of life of those who participate in them. One of them is the Penitentiary Academic Program, aimed at men and women deprived of liberty, through which they are given musical instructions that allow them to participate in orchestras and choirs. Another program is aimed at serving children or young people with physical and cognitive disabilities.
​
Through the individual and collective practice of music, "El Sistema" involves children and young people of all social classes without any form of discrimination. Orchestras and choirs become the places where positive attitudes, ethics, aesthetics, and spiritual values ​​are cultivated. The musicians get to develop their self-esteem, confidence, social skills, discipline, and leadership. They also learn to engage in healthy competition and to persevere.
​