An Introduction to the Suzuki Method
by Jose Carlos
​© JustViolin.org​ 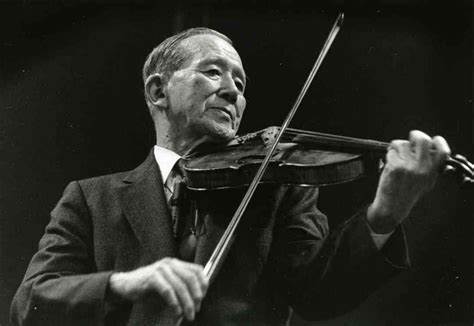 ​Shinichi Suzuki (1898 - 1998) was a violinist and musical pedagogue born in Nagoya, Japan. He was the creator of the Suzuki method for music learning. His father was a luthier, and although his music vocation wasn't until his late teens, he lived a childhood surrounded by musical instruments.

He started learning the violin at the age of 17 at the Tokyo conservatory, at a time when western music was considered exotic. This led him to further his studies in Berlin, Germany, in 1924, where he becomes a disciple of Karl Klinger. He also lived in Paris for some time before he went back to Japan in 1932 and started a career as a pedagogue.

​He developed his method for music learning that would also be translated and adopted by Western institutions. These methods include learning techniques for violin, piano, and cello. His scheme for teaching music is now an international movement that has contributed to the evolution process of many children education theories.
​

​Suzuki's method is based on a single idea, which he called "mother tongue." He observed that kids learn their native language with great precision. He assumed, since kids are always immersed in the sound of their mother tongue, they would also respond to music in the same way if they're exposed to it regularly. They would develop extraordinary music skills just as they do with language.
​
This concept is not just a method of education; it is also a philosophy that regards kids as individual human beings. It also promotes the idea that skills are not hereditary but imitated, learned, and developed.
​

Suzuki also supports the fact that kids can learn earlier than most traditional teachers estimate. He says that starting from the very first stages of childhood from 3 or 4 years old gives them a head start to build up excellent skills even though they're not considered to begin learning.

​This also follows the "Mother tongue" concept, the pace advancement is dictated by the kid and not his/her age or other factors. Kids start walking when they're ready for it, not before. These beginnings might be slow at first, but the results are visible in the long term.​
​
If kids in this process are respected and encouraged without any pressure, they will end up with a greater personal fulfillment. They'll also learn more in-depth and play with greater pleasure and comfort.
​

​The Role of the Teacher

The music teacher plays a fundamental role in the learning process and must have an attitude of love, support, and motivation towards the kids. It is necessary for all teachers to fully understand that Suzuki's method is not another theory book to teach pieces like the traditional methods. The philosophy, function, and application must be exercised in all extents.
​
The teacher must also understand that this method is progressive. Nothing should be skipped or avoided just for the sake of making the kid learn faster. Learning fast is not the goal of Suzuki's philosophy. He emphasized on learning in a very efficient way through discipline, imitation, and exercising the memorization as the key to success.
​