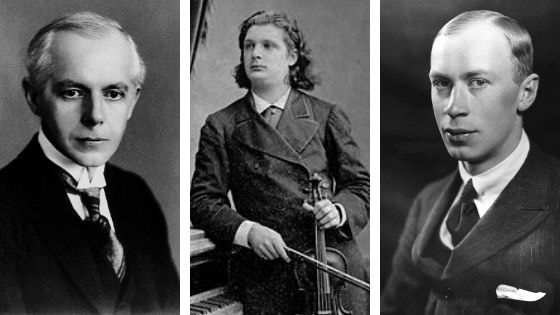 The violin is known to be a melodic instrument, it is often seen playing with other instruments in various chamber and orchestral settings. However, Johann Sebastian Bach in his Six Solo Sonatas and Partitas for Violin BWV 1001-1006, set a high standard on how the violin can be used alone to play multiple voices (melody and harmony) or polyphonically (fugue). Although composers before Bach has been writing for unaccompanied violin, none has really come close to produce works that are similar to the standings of this monumental set of compositions.

Two hundred years later, composers in the 20th Century began to embrace this instrumentation once again. Collectively, they produced a wide range of repertoire for solo and unaccompanied violin. Some of these works share similarities with Bach's in terms of objective, structure, and compositional technique.
​

Eugène Ysaÿe's Six Sonatas for Solo Violin were intended to emulate the Solo Sonatas and Partitas of J.S. Bach. Ysaÿe wanted the set of works to capture the evolution of modern violin technique and the musical style of the 20th century. The six sonatas were dedicated each to a prominent violinist of that era: Joseph Szigeti, Jacques Thibaud, George Enescu, Fritz Kreisler, Mathieu Crickboom, and Manuel Quiroga. These sonatas are highly demanding on the performers and can be seen performed in concert halls and violin competitions across the world.

Sergei Prokofiev's Sonata for Solo Violin in D major, Op.115 was commisioned by the Soviet Union's Comittee of Art Affairs. It was originally intended not for solo violin, but a group of violin students to play in unison. This sonata is largely diatonic, and relatively simple from its technical and music standpoints, compared to other works of similar genre in this period. It has three movements: the first a lively allegro, the second a theme and variations, and the third characterized by its mazurka rhythm.

Béla Bartók's Sonata for Solo Violin, Sz. 117 was dedicated to and premiered by Yehudi Menuhin. It was composed in Bartók's final years when he was living in the United States. This sonata has four movements and features a wide range of violin techniques along with some Hungarian folk elements. It is extremely challenging technically when it was first conceived and Menuhin had to suggest a few minor changes to make it more "playable".

Ernest Bloch was an American composer born in Geneva, Switzerland to Jewish parents. The two suites for solo violin were among his final works, dated 1958. Both suites have four movements each, and they are to be played without pause in between. They were commissioned by Yehudi Menuhin, and were considered as Bloch's more "modernistic" works.

Phillip Glass's Partita for Solo Violin (2010) was the result of the impressive collaboration between violinist Tim Fain and the minimalist composer. Tim Fain is widely known for his role in the Hollywood movie "Black Swan". Glass wrote this seven-movement suite especially for Fain, who has performed and recorded it.

Karl Amadeus Hartmann was a German composer but was relatively unfamiliar to many people. In the year of 1927, with a sudden burst of creativity, he composed two suites and two sonatas for solo violin. Violinist Ingolf Turban made a world premiere recording on the complete set of Hartmann's music for solo violin in 1999.

​Others: Stravinsky, Penderecki, and Corigliano

Igor Stravinsky's Elegy for solo violin can also be performed on the viola with transposition to a fifth lower. It was composed in the memory of the founding member of Pro Arte Quartet, Alphonse Onnou. This elegy is a slow and meditative-like piece in ternary form. Stravinsky used double-stops on the violin to achieve two-part writing, and the entire piece was performed with mute for a kind of dampened tone.

Krzysztof Penderecki's Cadenza for Solo Violin was originally Cadenza for Solo Viola. It was composed as an appendix to the Polish composer's viola concerto in 1984. The piece has no time signature and bar lines. It started in a slow speed with a two-note motif that resembles "sighing", and went into an intense Vivace section in the middle before ending the piece with the same two-note motif.

Award-winning composer, John Corigliano is best known for his score to the movie "The Red Violin". The composer has revisited the film score several times. From the original Chaconne for violin and orchestra he composed for the film, he then wrote a concerto, a suite, and the Red Violin Caprice for Solo Violin. The Caprice is a highly virtuosic piece that has a theme and several variations to it.