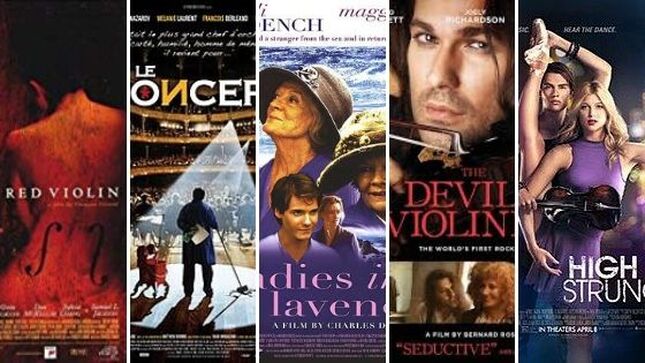 They Shall Have Music

They Shall Have Music was a 1939 film that featured Jascha Heifetz as... Jascha Heifetz! It was a classic black-and-white film that advocates music education for the poor.

The story revolves around Frankie, a young street bully who has some talent in music. After he watched a Heifetz's concert, he fell in love with the violin. As his stepfather threatened to send him to reform school for his bad behaviors, he ran away from home and ended up staying and studying at the Lawson School of Music. At the school, the management was facing foreclosure due to financial issues. In an attempt to save the school, they tried to find a way to get Heifetz to perform at their school concert.

Heifetz acted and performed in the film. He played Saint-Saëns Introduction and Rondo Capriccioso, Dinicu's Hora Staccato, Ponce's Estrellita, Tchaikovsky's Melodie from Souvenir d'un lieu cher, and at the end of the movie, the finale from Mendelssohn's Violin Concerto in E minor.
​

The Red Violin was a 1998 multi-national film that followed the story of a mysterious red-varnished violin over five centuries, across different cities, from its making in Cremona, to Vienna, Oxford, and Shanghai. Finally, it ended up in an auction in Montreal. This film featured international casts like Samuel L. Jackson, Carlo Cecchi, and Slyvia Chang.​

What attracted violin lovers to this film was the many scenes of violin-playing and the Academy Award-winning film score by John Corigliano. Joshua Bell recorded the violin part for the movie and the soundtracks. Corigliano later adapted this film score into various concert versions.
​

Music of the Heart

Music of the Heart was a 1999 biographical-drama based on the story of a music teacher in New York City. In this film, Meryl Streep played Roberta Guaspari, a violin teacher known for her work in running music programs for underprivileged kids at inner-city schools. At the start of the film, Roberta, who recently got divorced, moved with her two sons to her mother's house in an attempt to rebuild her life. She was later accepted as a substitute teacher to start a violin program at Central Park East, East Harlem. As most kids came from struggling families, Roberta's job was not an easy one. Through sheer determination, she managed to instill discipline and inspire the kids to prepare for a successful concert.

Fast forward to the tenth year of the violin program; the program has become very popular, and students who want to join need to be selected by lottery. One day, Roberta received the news that the Board of Education has cut its funding. She vowed to fight back by enlisting her friends, former students, and parents to hold a benefit concert. This event got the attention of professional musicians, and they came to support it.
​
Violin teachers are sure to enjoy this film because they can relate to it very well. The ending scene at the benefit concert is one that is not to be missed. It featured a host of world-class musicians including Itzhak Perlman, Arnold Steinhardt, Isaac Stern, Mark O'Connor, Michael Tree, Charles Veal Jr., Karen Briggs, Sandra Park, Diane Monroe, and Joshua Bell. Meryl Streep reportedly took intensive violin lessons for two months to play the role of Roberta.
​

Ladies in Lavender was a 2004 English film that once again had Joshua Bell playing its original soundtracks. Nigel Hess composed the film score. It was a beautiful film set in a fishing village of the coastal Cornwall. The story tells of a young and talented Polish violinist who got washed ashore following a ship crash. Two elderly sisters who lived by the shore saved him and nursed him back to health. One of the sisters began to develop feelings for this young violinist, but he had to leave them in pursuit of his career as a violinist. Conflicts ensued, but were quickly resolved. The film ended graciously with the two sisters traveling to London to attend his debut performance.
​

El Violín was a 2005 Mexican short film directed by Francisco Vargas. Despite the title of the movie, the story is not so much about music. Instead, it is a drama about the peasant's revolution in the 1970s rural Mexico. The film opened with violent scenes of torture and rape.

Plutarco was an elderly violinist who has an amputated right hand. He played the violin by tying the bow to his wrist. Along with his son and grandson, they earn their living busking by the street. Plutarco's son, Genaro, was involved in smuggling weapons for the rebels. They managed to escape when the army raided their village. Plutarco bold himself to return to his village to retrieve the ammunition hidden under the crops. He convinced the captain to allow him access to the farm in exchange for playing and teaching him music. One day when the captain was not around, he attempted to swap the violin with the ammunition and smuggle them out in his violin case. Unfortunately, his plan was later discovered when the army found his violin.
​

Le Concert was a 2009 French comedy-drama that tells of the story of Andrei Filipov, former director of the Bolshoi Theatre Orchestra who was fired for hiring Jewish musicians. He then worked as a janitor at the theatre. One day, Andrei intercepted a concert invitation and secretly decided to gather his former musicians to perform in Paris in place of the Bolshoi Orchestra. He insisted on having Anne-Marie Jacquet to perform the Tchaikovsky's Violin Concerto. The story continues to unfold a hidden secret that Andrei has been keeping from Anne-Marie that involves her mother. The movie ended with a triumphant performance of the Tchaikovsky's concerto.
​
The actress to the role of Anne-Marie, Mélanie Laurent, was not a trained violinist, but she took some violin lessons to play that role. Most trained musicians can quickly point out that the violin playing in the film was fake. Nonetheless, it is still an enjoyable film, especially for classical music lovers.​
​

The Devil's Violinist was a 2013 film that tells the story of Niccolò Paganini. This fictionalized account centered around the relationships between Paganini and his diabolical manager, Urbani, as well as his love interest, Charlotte Watson. Regardless of the credibility of the film on the life of the Italian violinist-composer, violin lovers do not need another reason to watch David Garrett's acting debut as he took on the role of Paganini.
​
David Garrett played many of Paganini's music in some dazzling scenes within the film. Among them are Caprice No,5, Caprice No,24, Carnival of Venice, God Save the Queen, La Campanella, and his arrangement of "Io Ti Penso Amore" (from the 2nd movement of Paganini's Concerto No.4) with soprano Andrea Deck, who played the role of Charlotte Watson.
​

High Strung was a 2016 American film about dance and music. The story followed Ruby, a dance student who received a scholarship to study at the Manhattan Conservatory of Arts, and Johnny, a busking violinist at the subway in New York City. Ruby is talented in the classical dance, while Johnny prefers the improvisational. Their lives quickly get entangled, and they fell in love with each other.

The violin-playing scenes in the film at times may seem bizarre and unrealistic to actual violin players. There was a scene where the two violinists were "dueling" each other and engaged in a sword-fight using the bow! Despite that, it was an uplifting and entertaining film that has received some decent reviews.​
​

Abominable was a 2019 animation that tells the story of a Yeti - a mythical creature originated from the Himalayas. After the Yeti escaped from its captivity in Shanghai, it hid on the rooftop of an apartment building and met Yi, a violin-playing teenage girl. Yi, along with her two other friends, went on a journey to send Everest (what they named the Yeti) home and to escape from the bad guys.

Yi was always reluctant to play the violin in front of people as it reminds her of her deceased father. One time during an escape, Yi accidentally broke her violin, but Everest used its magical power to restore it. As a result, the new violin has some of Everest's power that can control the forces of nature.

Abominable is a heart-warming family film that is sure to entertain. However, the film was banned by several countries in Southeast Asia as it portrayed the controversial map of the Nine-dash Line that is related to territorial disputes in the South China Sea.
​
Go Back