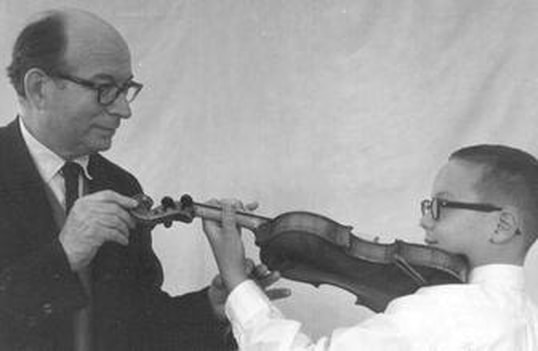 One of the founders of the American String Teacher Association, Paul Rolland, was born in Hungary and subsequently moved to work in the United States. He taught at several schools before being appointed as the professor of violin at the University of Illinois, a position he held until his death. He became a well-known figure for his approach in early string teaching that emphasizes on physical balance and freedom of movement. He believed that "most elements of string playing can be introduced in embryonic form during the first year, and refined after that."​
​

When Rolland first came to the United States, he noticed that the teachings in American schools tend to focus on isolated movement of the fingers, hands, and arms. This resulted in the build-up of static tension in other parts of the body. Areas that are most susceptible to static tension (for violinists) include the lower body (legs and feet) and the left shoulder. The human body is a unified system where the tension in any part of the body can quickly spread to the whole body, affecting the physical balance and ease of movement in string playing.

According to Rolland, an object that is in balance can be moved easily. Similarly to the physical body, good balance allows for ease of movements. The concept of balance applies to all areas of string playing, including the posture, violin hold, and bow hold. Rolland related the movements in string playing to the movements in sports, particularly golf and baseball. To make a good swing, the player has to maintain a good body balance, use the right leverage (the larger muscles of the whole body instead of isolated parts), anticipate, and follow-through the action.
​

​The Teaching of Action in String Playing

"The Teaching of Action in String Playing" is the result of the University of Illinois String Research Project - a government-funded project conducted by Rolland. They recruited children from the Illinois public schools to participate in this program for two years, where they learned to play the instruments using Rolland's method. The project was filmed and they publish the companion materials along with it. In this project, violin techniques were taught as simple actions that they already know, along with plenty of practice and review (this is also one of the most essential aspects in Suzuki's teaching).

Rolland's method does not only include detailed studies on physical movements, he invented games for young students to play in private and group lessons to keep them engaged. The project reported favorable results from the teachers involved, particularly in faster learning compared to conventional teaching that emphasizes on learning notes and tunes. Rolland's ideas were later adopted into modern pedagogy methods by other teachers, such as Mimi Zweig.

This is the companion book to the complete film series of the University of Illinois String Research Project.
"Action Studies" is a booklet that contains graphic illustrations of the exercises taught by Rolland.
​
​The tunes used throughout the project were composed by Stanley Fletcher and published in two volumes as "New Tunes for Strings". These are tunes that specifically written to incorporate the instructional concepts of Rolland. Separate editions are available for each string instruments.

Since 2017, the Paul Rolland String Pedagogy Workshop was being held annually at the University of Illinois by former Rolland students, including his son and daughter-in-law. The week-long program offers training in Rolland's pedagogy method, along with a variety of enrichment activities. Recently, they have also begin to offer a certification program for music teachers.