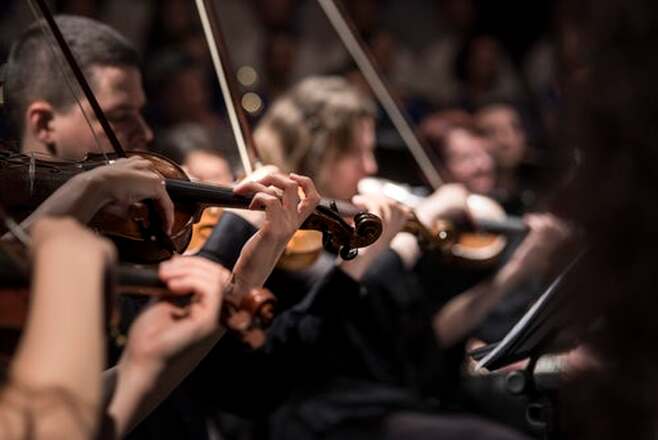 ​
​The musical term pizzicato is a direction for the players of bowed string instruments (i.e., violin, viola, cello, and double bass) to pluck the strings with their fingers instead of using the bow. The word pizzicare in Italian means 'to pinch.' The earliest known use of pizzicato can be traced back to Monterverdi's Madrigal - Il combattimento di Tancredi e Clorinda.

Typically, the string is plucked with the index finger while the bow is held in hand. Some violinists and violists may choose to anchor their thumbs on the edge of the fingerboard while doing pizzicato. In a long pizzicato passage, or an entire movement of pizzicato, string players may put away their bows to focus on the plucking. In a rapid pizzicato passage, players may pluck the strings with alternating fingers as there is a limit to how fast one can play pizzicato with the same finger.

Pizzicato can be performed by the left hand as well. Composers mainly use this technique to showcase virtuosity by combining it with the bowed notes, one good example is the 9th variation of Paganini's Caprice No.24. Plucking with the left-hand helps to build good technique as well. In Mimi Zweig's teaching, young violin students are taught to practice plucking the string with the left-hand fingers to promote a quick "lifting" action that originates from the base joint. Left-hand pizzicato are usually notated with a "plus" sign above or below the note.

In a 2010 article with the Strings Magazine, violinist Paul Stein said that "while some bows are a lot better than others, your index finger is as good as anyone else's." To do a good pizzicato, Stein recommended that the fleshy part of the finger must engage the string rather than trying to pluck the string too fast. It is also worth noticing that each string has a different thickness, and therefore we need to adjust the amount of force we exerted in plucking.

For cellists, Christoph Ritcher, in a 2015 article with The Strad magazine, said that pizzicato should be a whole arm movement to produce a "rounder sound." He recommended using the middle finger for single-note pizzicato for the same reason. He also suggested that chords or multiple stops that are spread to be played by the thumb while blocked chords should be played simultaneously with multiple fingers. Examples of both types of chord can be found in Debussy's cello sonata.

When doing pizzicato, avoid plucking the strings too close to the bridge. Instead, pluck the strings around the higher range of the fingerboard. By doing so, we prevent grease on our fingers from getting onto the strings at the place we bow. At the same time, plucking close towards the middle of the string produces a much better sound. In the Suzuki method, young students are taught to listen to the resonant sound of the pizzicato and then try to reproduce it with the bow.

Switching between pizzicato and arco (to play with the bow) in the same piece of music can be very tricky if it happens too quickly. It is essential to practice the coordination required in these passages carefully. It is also very common for inexperienced players to rush in pizzicato passages.​

Fingernail pizzicato is another modern approach that involves plucking the string with the fingernail instead of the fleshy part of the finger. The sound will be sharp and metallic. As most string players do not have long nails, plucking with a plectrum may produce the same result.

Pizzicato chords refer to plucking more than one string at a time. In this case, the plucking action is quite similar to the act of strumming the guitar. Most of the time, it is plucked from the lower string towards the higher string. However, there may be instances where the composer wants the chord to be pluck from top to bottom. An example of this is in William Kroll's Banjo and Fiddle, where the violinist pluck the strings in both directions.

Edward Elgar used the pizzicato tremolo in the orchestral part for the third movement of his violin concerto. He suggested that these notes be "thrummed with the soft part of three or four fingers across the strings."
​

Music Featuring Extensive Use of Pizzicato