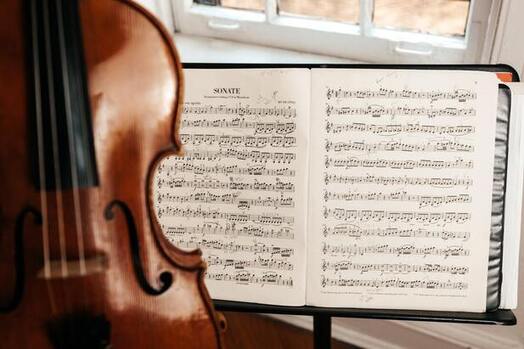 ​How to Interpret Staccato

Staccato is a musical term that refers to notes that are played short and detached. Notes to be played Staccato are simply notated with a dot above or below. Staccato can also be used as a term to describe the articulation of a passage or a piece. The opposite of Staccato is Legato, which means smooth.

Staccato itself is not a type of bowing technique. When we as violinists see Staccato in our music, we need to determine what kind of technique to employ on these notes. The decision we make must reflect the style of the music and the composers’ intentions. Technically, when there is a note marked with Staccato, we can play it just by stopping the bow halfway down the note to achieve the desired effect. However, this is rarely the case, because by abruptly stopping a note, it does not sound very musical.
​
In most classical repertoire, a running passage of Staccato notes often means some sort of bouncing bow-strokes (e.g., Spiccato or Sautillé). Staccato is sometimes marked on notes to be played with Martelé as well. If it involves dotted rhythm, it may also be suggesting Hooked Bow. Things get more complicated when there are slurs involved. When two or more Staccato notes are slurred, we have to figure out if it is Slurred Staccato, Flying Spiccato, Ricochet, or something else.

In Baroque music (and some Classical-period music), we know that for historical reasons, certain notes in the fast (and sometimes slow) movements need to be played slightly detached even when they are not marked with Staccato. However, some editors would add to the score Staccato markings that were not there in the original manuscripts. Usually when playing these detached notes in Baroque music, the bow hair does not leave the string entirely but rather "lightening" towards the end of the bow-stroke.
​​

Spiccato is a bowing technique in which the bow is bouncing on the string. To play Spiccato, a player would drop the bow onto the string and let it rebound until the bow hair leave the string. After the rebound, the player may continue with another Spiccato in the other direction by dropping the bow again. The movement of the bow when playing repeated Spiccato notes would look like the shape of a saucer.

To be able to perform a good Spiccato, there are a few things to watch out. In a slower passage of Spiccato, we allow the bow to rebound higher, and in a faster passage, we reduce the height of the bounce to keep up with the tempo. A steep angle where the bow drops almost vertically would produce a short and spiky note, whereas if we flatten the angle, we can get a rounder sound.
​
The part of the bow used for Spiccato also varies according to the sound we want. Playing closer to the frog can produce a heavier and louder sound; while playing closer to the middle produces a lighter and softer tone.
​

As Spiccato requires the bow hair to leave the string entirely as it bounces, it is usually used in slow or medium tempo. On the other hand, Sautillé (or Saltando) is used for fast passage. Sautillé is played in the middle of the bow with rapid successions of short bow strokes.

​It is best to play it with relaxed hand and fingers, along with some minor movements in the forearm. Because of the speed of the bow strokes, the bow stick would be bouncing while the bow hair stays on the string, producing short and detached notes. An example of Sautillé bowing can be found in Carl Bohm’s Perpetuo Mobile.
​

​Other Types of Off-String Bow

A Slurred Staccato of two or more notes means playing the notes in the same bowing direction, but with space in between each note. These notes can be played firmly on the string or allowed to come off the string with a little Collé (see below) action. Galamian differentiated these two as “Solid Staccato” and “Flying Staccato” in his Principles of Violin Playing and Teaching.

Flying Spiccato implies a series of Spiccato notes played in the same bowing direction, commonly on the up-bow. A good example of Flying Spiccato is found in Paganini’s Caprice No.10.
​
Ricochet, on the other hand, is usually played on the down-bow. It requires slapping or throwing the bow, in the middle to upper part, onto the strings and setting off a series of natural bounces. The Ricochet would end with a lift in the opposite direction at the end of the bow stroke.
​

​As mention earlier, notes to be played Martelé may be marked with Staccato as well. A Martelé bow-stroke starts with a "bite" and followed by a quick release, creating an accented note. The bow stays on the string all the time.

Hooked Bow is a pair of notes marked with a slur and a staccato on the second note, commonly seen in pairs of "long-short" notes in dotted rhythm or compound time. In Hooked Bow, the short note is separated from the long note before it, but connected to the next note after it.
​  ​