The Origins of the Violin
​​© Goh Tong Keat​ 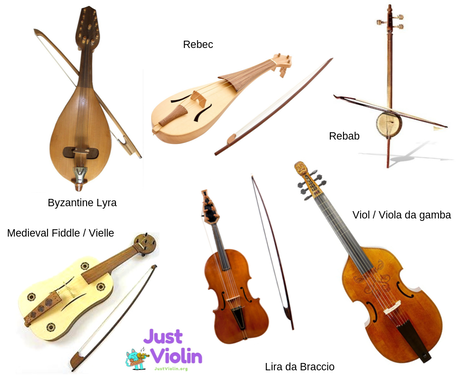 According to Encyclopædia Britannica, the Rebab reached Europe in two ways. It was brought into Spain by the Arabs and developed into the Rebec. Unlike the Rebab, the Rebec has a boat-shaped body and a fingerboard. It was played by placing it on the shoulder, chest, or arm in a manner quite similar to the violin. It became a prominent instrument in the tradition of Arab-Andalusian music.

On the other hand, the pear-shape variety of the Rebab was adopted by the Byzantine Empire and became the Byzantine Lyra. The Lyra has three to five strings and was held upright when played. It spread across Europe, and various adaptations of the Lyra can be seen in the folk music tradition of the Balkan regions. The Medieval Fiddle (Vielle), which subsequently appeared in Europe, began to look more like the modern violin.
​

​From the 15th Century Onwards

​In the early 15th Century, the Italian Lira da Braccio emerged and replaced the Medieval Fiddle as the better option. The Lira da Braccio is considered as the direct predecessor of the modern violin. At the same time in Italy, the Viola da Gamba (Viol) was being developed and enjoyed great popularity until it gets overshadowed by the modern violin in the 17th Century. The Viola da Gamba is a fretted instrument played by placing it on the knees or in between the legs.

In the early 16th century, the first modern violin was built by Andrea Amati in the Northern Italy region. And so it started the golden age of master violin makers in the city of Cremona. Andrea's grandson, Niccolo Amati, would later became the teacher of two of the most prominent violin makers in history - Giuseppe Guarneri and Antonio Stradivari.

The violin did not enjoy good reception in the beginning. It was considered lower in status compared to the more aristocratic Viola da Gamba. However, it began to gain prominence when instrumental music became more independent as a standalone form of performance rather than just as an accompaniment to dances and songs. The two leading genres of violin music in the 17th Century were concertos and sonatas. The violin went through various structural and setup modifications throughout the 17th and 18th Century which resulted in increased dynamic range and projection. By the 19th Century, the violin has emerged as one of the most admired instruments in the concert hall.